Fill out the form below to schedule a discussion with one of our experts, or contact us at Info@FlagshipAP.com

Scope and Scale of the Apple Fintech Ecosystem

Apple effectively discloses no data on its fintech business, forcing us to speculate on the size and substance of this franchise. There are plenty of wacky numbers floating around as to Apple’s scale in fintech, including one widely quoted data point that Apple processes $6 trillion of payments volume annually (claiming to be more than Mastercard). This $6 trillion data point is just silly. We estimate that Apple “controlled” roughly $800 billion of payment flows in 2022. Though not close to the overly-hyped $6 trillion, our estimated $800 billion of annual flows is still impressive and leaves no question that Apple is a key actor in the global fintech industry. We estimate that Apple’s total payment flows will grow to $3.2 trillion by 2030. Within this article, we dissect the scope of the Apple fintech ecosystem and explain our approach to estimating its size.

Scope of the Apple Fintech Ecosystem, Its Range of Services, and Customers

Apple’s fintech ecosystem is an octopus with many tentacles across the fintech market from consumers to merchants. In Figure 1, we illustrate and describe these key touchpoints. 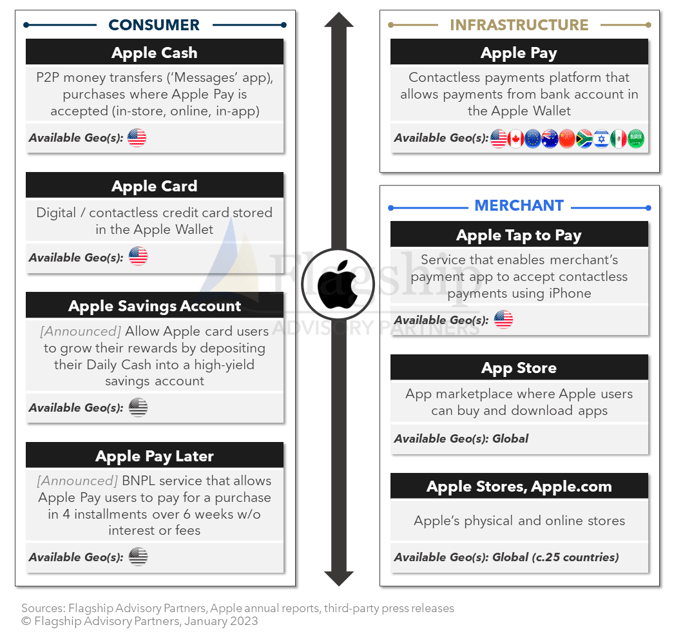 Some of these touchpoints are well-established and lucrative franchises, for example, the App Store. Other touchpoints are still in development, particularly within the suite of consumer fintech services. For example, Apple Pay Later has yet to launch, with the development recently delayed. Apple leverages its unique position as a leading global provider of mobile technology, application and content ecosystems, and a uniquely beloved consumer brand to offer a range of payments and financial services to consumers and businesses.

Size of the Apple Fintech Ecosystem

In Figure 2, we estimate the current and projected flows across the Apple ecosystem. We estimate that in 2022, Apple controlled c.$800 billion of payments volumes (noting that, for example, Apple does not literally process Apple Pay transactions as they flow from merchants to card issuing banks via Visa/Mastercard; though Apple is in the corresponding stream of data). 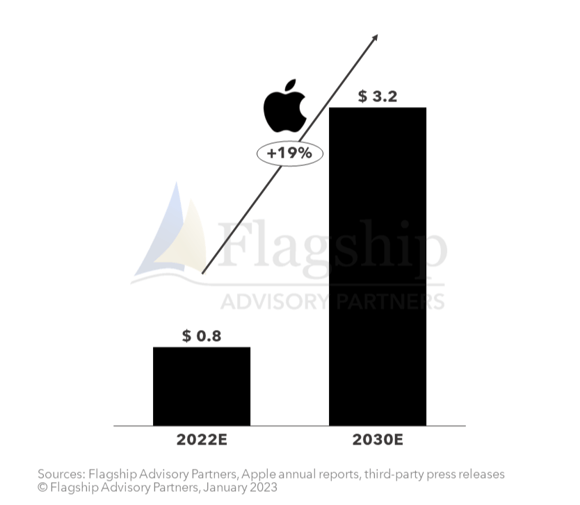 We expect these flows to grow to $3.2 trillion by 2030, a compounded annual growth rate of 19% from 2022 (noting that a material portion of this growth will come from services not in-market today). The distribution of these estimated flows across the range of apple touchpoints are illustrated in the figure below (Figure 3).

Some have described this Apple Pay penetration as disappointing, but we see this as a huge success given the many roadblocks to achieve such results across many countries and payment use cases. Apple Pay is just under half the size of PayPal by volume of flows, present in the market for 8 years (vs. 24 years for PayPal). Apple Pay is successful both at the physical point-of-sale (POS) and online, though we see online as more successful in the U.S. (where NFC behaviors are less engrained), vs. the success of POS in U.K. and Europe (driven by engrained NFC behaviors and slower launch of Apple Pay online). If we had to guess, we believe that the U.K. is likely Apple Pay’s most penetrated market. 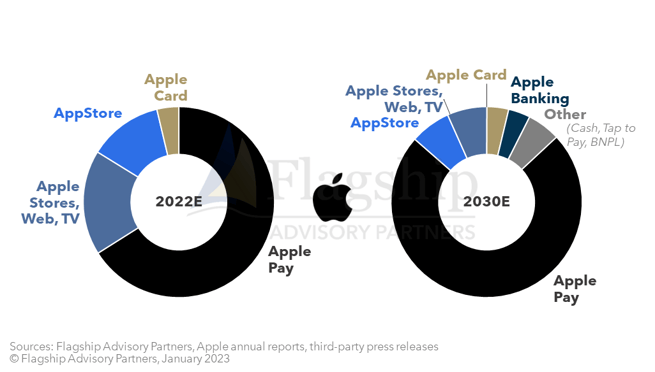 The second largest source of fintech flows are the payment volumes that Apple accepts as a merchant, including Apple’s own product/service sales channels (Apple stores, Apple.com, and Apple’s music/TV/video channels) and the App Store. We estimate that Apple accepted c.$242 billion of payments via its own channels in 2022 (i.e., as merchant of record). The App Store is Apple’s most lucrative fintech platform. We estimate that the App Store processed $100 billion of payments in 2022, generating c.$25 billion of revenue for Apple (assuming an average commission rate of 25%). Of course, not all of this commission is attributable to the payments function. Framing Apple as a merchant services fintech is a theoretical exercise (e.g., what App Store margin you apply). Depending on how you frame this, Apple is generating billions of merchant fintech revenue today, equivalent in size to some of the largest global PSPs.

As shown in Figure 4, Apple has a rapidly developing consumer fintech franchise. Today, volumes arising from Apple Card and Apple Cash are modest (we estimate c.$30 billion of purchase and remittance flows in 2022). Apple is clearly focused on building out their portfolio of consumer services including Apple Pay Later (slated for launch in 2023), savings accounts (recently announced as an add-on to the Goldman Sachs issued Apple Card). We anticipate that Apple will continue to add banking services including digital bank accounts, plastic debit cards, and other products and services. Across this full range of consumer products, we project today’s $30 billion of annual volumes to grow at high rates to c.$350 billion by 2030. 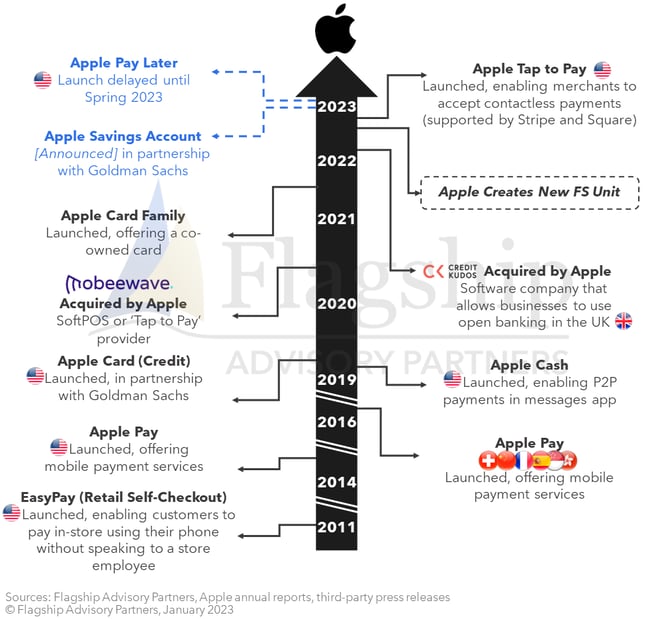 2022 also brought the launch of Apple Tap-to-Pay, the tightly controlled Apple SoftPOS platform. Apple works with merchant payment service providers to deliver the service, for example, Stripe, Adyen, Chase, and others. We have bullish expectations on the growth of this platform, projecting more than c.$60B of flows via this platform by 2030 (based on our speculative estimations).

As shown in Figure 5, Apple relies on many partners today to enable its broad range of fintech services, including, Goldman Sachs, Green Dot, and JP Morgan Chase, etc. Visa and Mastercard play a central role and most of Apple’s fintech flows today are running over V/MC networks. We do expect an expansion of Apple infrastructure to include more non-card, A2A payments/rails in the future. 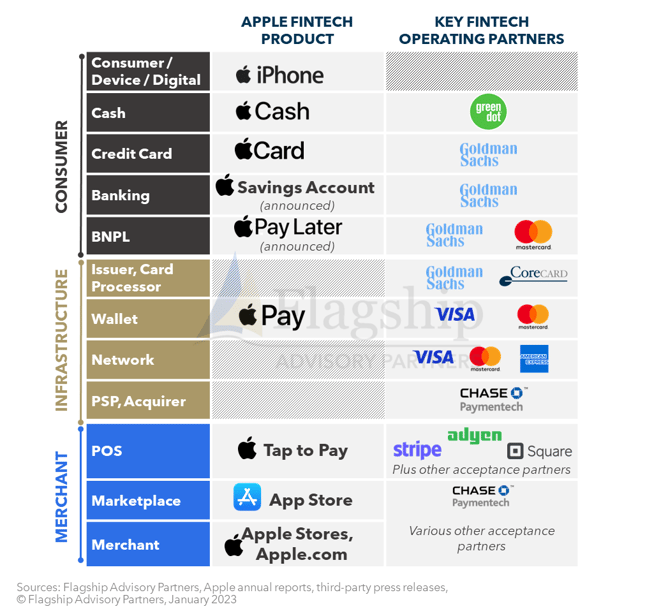 Much has been made about Apple’s intentions to insource operations of its fintech ecosystem in the future. There is some evidence of this today for components of Apple Cash and Apple Pay Later. However, we are not convinced that Apple will subsume all or most of the value chain roles delivered by partners today. For example, we do not see a positive business case for Apple becoming a fully licensed bank or operating all aspects of V/MC processing. As a technology company, we see the collateral damage for becoming a fully licensed bank as too great vs. the option to partner with strong banking-as-a-service partners … a market that is increasingly well-supplied.

Apple controlled an estimated $800 billion of payment flows in 2022. We estimate Apple’s total fintech ecosystem flows to grow to $3.2 trillion by 2030. Apple, with its rich and expanding portfolio of unique fintech services, is a key actor in developing the global fintech industry. We are excited to see the developments to come out of Apple in the coming years … but also hope that Apple eventually publishes some data on its fintech franchise!

Our Most Read Insights of 2022: Debate About the Impact of BaaS, Open Banking Payments, and SoftPOS

SoftPOS is Ready for Prime Time in 2023

SaaS Providers & Platforms: Navigating the Payment Facilitation Journey and Beyond, 2022